Probably unclimbed. Initially a grade of 8A+ was suggested but no one has been able to repeat it despite many attempts from strong suitors. The discrepancy between the proposed difficulty and the actual difficulty, combined with Gaskin's history of unsubstantiated ascents suggest this one is another figment of his imagination. 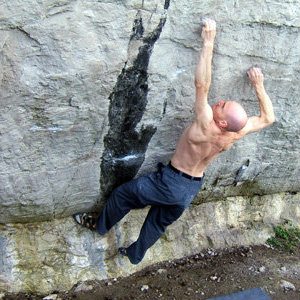